There are a variety of different fish species that can be stocked into garden fish ponds, and with the right environmental conditions provided, many species will thrive in a pond habitat, and may even spawn when seasonal conditions are favourable. The diversity among pond fish species is great, from vivid colouration and elongated fins through morphic breeding, to the natural shape and colouration of the original wild species as evolution intended. Some pond fish species are obliging surface feeders, others are more elusive and stay in the depths, rarely giving away their presence at all. A healthy mix of different fish species can coexist very happily within a garden pond. Water Garden’s Pond Fish guide is a brief introduction to some of the fish species that can be commonly found in garden ponds in the UK. 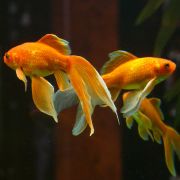 The Goldfish is the most popular and widespread fish species found in garden ponds and is an ornamental variety of wild ancestral Cyprinid fish. The bright colouration, wide availability and low cost of this fish make it an ideal stocking species for garden fish ponds. The Goldfish is fairly hardy and adaptable by nature and will spawn seasonally if the conditions and habitat are favourable, producing young fish fry every summer. The Goldfish can grow sizeable if the pond is accommodating and food is plentiful. This species will surface feed on all floating food types and will also forage amongst aquatic weeds for natural food. The Goldfish is not a heavy waste-producing species and is therefore a good low maintenance option for all fish keepers. The Sarasa Comet is a variety of Goldfish with long fin lobes. The Sarasa Comet typically has a two-tone colouration of red and white, with distribution of colours varying greatly among individual fish. Some individuals will have a red top half, with a white lower half, divided by a prominent border, whilst other individuals can have a predominant white or red base with patches of colour on the head, back or flanks. Sarasa Comets share the same diet and feeding characteristics as the common Goldfish. 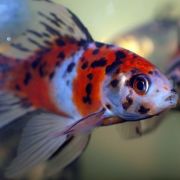 The Shubunkin is a three way hybridised species that combines genetics from the Common Goldfish, Sarasa Comet and Telescope-Eye fancy Goldfish. This mix results in the Shubunkin, a fish designed specifically for captivity that typically wears a calico colouration (blends of orange, black and white), sometimes with elongated fins lobes that it inherits from it fancy relative. The Shubunkin is typically a resilient species that can live happily enough in most pond environments and with other closely related fishes such as Goldfish, to which it is closely related. 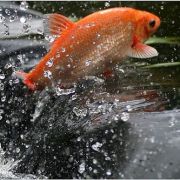 The Orfe is a slim-bodied fast swimming fish, an ornamental species from the Ide family of fishes. The most commonly available Orfe is the Golden Orfe, often nicknamed the ‘Carrot’ for its bright orange colouration, red fins and slim appearance. There is also a 'Blue Orfe', which is genetically the same species as the Golden Orfe, and shares all of the same characteristics and habits, with colouration being the only difference between these fishes. The Blue Orfe typically has a white to pale blue base colour, most often with flecks of orange and black across the back and along the flanks. Orfe are a shoaling fish that will typically swim in formation with their own kind. Orfe are more oxygen dependent than other pond fish species and does not tend to thrive in conditions where dissolved oxygen is limited. Orfe can be single colour, or marked with blotches across the back and flanks. Orfe will readily feed on floating feed and can be prone to jumping clear of the water surface if spooked. Orfe can grow to in excess of 30cm long if pond conditions accommodate growth. 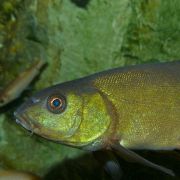 The Tench is a bottom-dwelling species of fish often stocked in garden ponds, but rarely seen unless the water clarity allows vision right down to the pond floor. The dark olive/brown colouration of the Tench, along with its tendency to stay close to the bottom of the pond can make this fish an elusive albeit beautiful addition to the fish stock. The Tench is a rotund-bodied fish with tiny scales and a dense mucus layer that give the fish a very smooth feel. The fins are large and rounded. Males and females can be distinguished by the size and shape of the pelvic fins, with the males having much larger pelvic fins than the female. The most striking feature of the Tench are the blood-red eyes which most specimens will feature. The Tench feed almost exclusively on the pond floor and will rarely surface to take food. The Tench can survive in conditions with very little oxygen and will exist on a diet of natural food in the absence of feed. The Golden Tench is an ornamental variety of the common/wild Tench. The characteristics and habits of this species are identical to its less-colourful cousin, but its appearance is dramatically different. The Golden Tench is typically tangerine orange to banana yellow in colour and often is peppered with black spots across the back and along the flank. The large rounded fins are orange to yellow in colour, again often with black markings. The eye is most often a solid black. The bright colour of this ornamental Tench variety make a more appropriate species for stocking into ornamental ponds as it cannot hide its presence so easily. The Golden Tench is primarily a bottom feeder, enjoys lily pads for cover and is a species that can survive in somewhat unfavourable conditions. 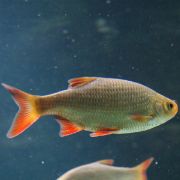 The Rudd is a classic freshwater fish with golden flanks and red fins. The Rudd is an indigenous wild fish of the United Kingdom and despite not originally being bred specifically for captivity, adapts very well to pond life. The Rudd is typically a deep-bodied fish with an upturned mouth and a longer lower lip, a fish perfectly designed for surface feeding. Rudd will often be seen hovering in the upper water layers and rising to take flies of the water surface. The Rudd is an obliging surface feeder, but it is limited to feeding on small items due to its small mouth and relatively small size. Rudd are low-waste producers and will shoal together if kept in numbers, making these a great species for mixed garden ponds. Rudd are more dependent on good levels of dissolved oxygen than other fish species. The Golden Rudd is an ornamental variety of the ‘wild’ Rudd. The Golden Rudd is redder in colour, sometimes black across the back and with occasional black blotching, but otherwise the same species as the Rudd. 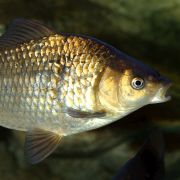 Carp, although not a native fish of the United Kingdom, have been here a long time. Introduced by monks as a stocked fish, and for a long time considered as an eating fish, Carp are now found in most lakes, rivers and canals in the UK. Carp originated in the Caspian Sea as a wild, fully-scaled fish species, but through selective breeding are now found in a number of different forms. Common Carp are a golden flanked fully-scaled Carp, most representative of the original wild Carp. Leather Carp feature no,  or very few, scales on the body at all and are browner in appearance. Mirror Carp are not fully scaled, but have some scales on the body. Mirror Carp scales are typically larger than the scales of the Common Carp and can appear reflective, giving this variety its name. Mirror and Leather Carp were originally bred specifically for eating, exploiting deformities in the scale pattern to produce fish with fewer scales, making it easier to descale fish for the table. Since eating Carp became less common, more decorative forms of Mirror Carp have emerged, such as heavily scaled Mirror Carp, and Linear Mirror Carp which feature a single line of scales along the centre of each flank. Carp are a good pond fish that feed well on the surface and the bottom. 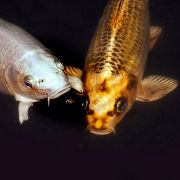 Koi Carp are ornamental varieties of Carp. Koi Carp were bred specifically for ornamental fish keeping and are available in a vast array of shapes, sizes and colours. Koi Carp are among the most popular fish for fishkeeping due to the friendly nature of the species, beautiful colours and patterns available, and large adult growth size. Koi keeping is a hobby in itself, with specialist fish keepers dedicating themselves to this species alone. Different patterns and markings allow Koi Carp to be categorised and valued based on the quality of the markings, with the most sought after fish fetching a high price at market from keen Koi collectors, keepers and enthusiasts. Koi Carp will coexist with other fish in a mixed-species pond, but the larger size and physicality allows them to outcompete smaller species for food, so fewer Koi in a mixed pond is advisable. Koi eat and waste more than other, smaller fish species, so a higher pond filtration requirement is necessary for keeping this species. Koi are very obliging feeders and can often be tempted to feed from the hand. 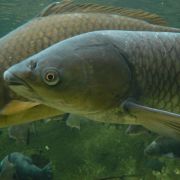 The Grass Carp is an elongated, torpedo shaped fish capable of growing very large on a diet of vegetation. Grass Carp are a flat-headed fish, quite different to other Carp species commonly associated with garden ponds. The Grass Carp is very different to the common Carp / Koi Carp fishes in appearance. The Grass Carp lacks the mouth barbules of other Carp varieties and the dorsal fin is a much smaller fin, situated on the centre of the back. The mouth is wide and the eyes are small and can appear orange to red in colour. The natural colouration is golden to olive-brown, with large scales that are distinctly uniform across the body, with dark fins. There is also an albino variety of this species. The wild Grass Carp is a herbivore and feeds on a diet almost exclusively made up of vegetation, but domesticated pond stocked fish can usually be persuaded to accept manufactured fish food off the surface of the pond. Grass Carp will often be seen cruising slowly just below the water surface. 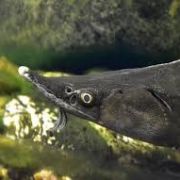 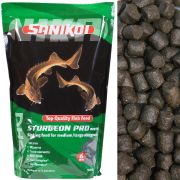 The Sterlet is a small species of Sturgeon. There are a number of different Sturgeon species that can stocked in a pond, but most Sturgeon will grow very large. The Sterlet is an ideal Sturgeon species for the pond as its growth is slow and its adult size is limited to around a metre long, unless the pond allows for further growth up to a maximum size of around 120cm. Sturgeon are active fish, but tend to keep close to the pond bottom. A larger pond is recommended over a small pond for this species. The Sterlet, like all Sturgeon species, is a bottom-feeding fish that requires a high protein diet, so a special sinking pellet feed is necessary to ensure that this species can feed and stay healthy. Sturgeon look very different to other typical pond fish, with a long, slender, grey, shark-like body, armoured ridges along the back and lateral line, and an elongated snout with protruding whiskers on the underside. Sturgeon require an oxygen-rich environment and do not cope very well in water with low-dissolved oxygen saturation levels. Therefore it is recommended that a pond containing any Sturgeon species is sufficiently aerated with a pond aerator and well circulated to keep the temperature cooler and oxygen levels high.

For assistance with filter system selection, pond volume calculation, pond aeration requirement or anything else pond related, please contact us and speak to one of our team of friendly experts for advice.

Products in this range

We use Cookies to improve your experience on Water-Garden.co.uk. You can read about our use of Cookies HERE. Please also read our Privacy Policy to learn about how we use your data as well as your rights and choices.